TOP NEWS OF THE WEEK:

India’s largest ever initial offering (IPO) by Life Insurance Corp (LIC), was oversubscribed 2.95 times as foreign institutional investors stepped up their bids in the last hours before the close of subscription on Monday (May 9), shunning currency risks and global market uncertainties.

Overseas investors put in orders for 61% of the shares set aside for institutional buyers in the $2.7 billion IPO – a third of the original target from the sale of a 3.5% stake in the country’s top insurer, according to stock exchange filing. The issue opened on May 4 and received bids through the weekend.

The anchor portion of the IPO drew in major funds from Norway’s Norges Bank Investment Management, Singapore’s GIC, and the Abu Dhabi Investment Authority, with a significant portion of the shares also going to domestic mutual funds.

The Saudi Public Investment Fund has committed $2 billion to Jared Kushner’s private-equity fund Affinity Partners, opening the door for investments in Israeli firms by the Saudi kingdom for the first time.

Affinity Partners – started by Kushner, son-in-law of former US president Donald Trump – has already selected the first two Israeli firms to invest in, according to the Wall Street Journal.

The decision marks the first known instance that Saudi Arabia’s $612 billion sovereign-wealth fund will directly invest in Israel. The move is seen as an indication of Saudi Arabia’s increasing willingness to do business with Israel, despite having no diplomatic relations.

The Exchange Fund of Hong Kong, which invests the city’s foreign reserves, suffered HK$55 billion ($7 billion) of investment loss in the first quarter ended March 31, dragged down by losses in the global equity and bond markets, figures disclosed by Hong Kong Monetary Authority on May 3 showed.

The fund lost HK$9.4 billion in Hong Kong stocks, which is the third consecutive quarterly loss, widening by 31% compared to the last quarter. The fund – which has not recorded a loss since  2020 – also posted HK$24.6 billion of losses in other stock markets.

The fund recorded the worst-ever deficit of HK$34.7 billion in bonds. It made gains of HK$13.7 billion in foreign exchange, a 63% increase compared to last quarter, which is the result of  translating foreign currency assets into Hong Kong dollar after deducting the portion for currency hedging.

Omers Infrastructure has signed an agreement with TPG Telecom to acquire 100% of its mobile towers and rooftop portfolio (the Tower Assets), for an enterprise value of $663 million (A$950 million), according to an official release on May 9.

The Tower Assets, which consist of over 1,230 sites concentrated in metro locations across Australia, will become the largest independent tower company in the country once the transaction is finalised.

Under the terms of the acquisition, TPG has entered into a 20-year contract to use the Tower Assets, with options to extend. TPG has also committed to building additional towers to further expand the network over the coming years.

Woolworths Group has appointed the $158 billion (A$227 billion) Australian Retirement Trust for its corporate superannuation services after terminating its contract with super fund AMP.

The Australian Retirement Trust — formed this year following a mega-merger of industry funds QSuper and Sunsuper — was selected by Woolworths to manage $2.8 billion (A$4 billion) on behalf of 30,000 employees after a competitive tender process.

AMP will continue to act as manager during a 12-month transition period. AMP said that exit of the mandate was not expected to have a material impact on its profitability.

It laid out basic standards and principles in areas such as product design and pricing policy. It also emphasised that banking and insurance institutions should fully disclose information, carry out consumer education, and help cultivate the mindset of long-term pension finance among Chinese residents.

Indonesia’s wealth fund may not reach its $200 billion target in the time frame set by the country’s president, as it aims to ensure sufficient returns for the state before making investments, according to its chief executive Ridha Wirakusumah.

President Joko Widodo had set a target last year for the Indonesia Investment Authority (INA) to reach $200 billion within two to three years, or around April 2024.  Established in 2021 with about $15 billion in assets, INA has been reported to have raised over $25 billion in investments as of March 2022, with contributions from pension fund CDPQ of Québec and the Abu Dhabi Investment Authority among others

Going forward, the INA would be interested to invest in digital technology, health care, and energy, said Ridha. It is also looking at replacing the country’s coal power plants with renewables as well as investing in the electric vehicle sector, he added.

Korea Investment Corporation (KIC) is seeking a global custodian bank with a minimum of $5 trillion of assets under custody to provide trustee and administrative services for its investments.

Applicants must operate a business covering at least 60 markets globally, including a local office or branch in Korea. Applications are open until June 7, with on-site evaluation and selection scheduled by July 18. In its request for proposal on April 27, the Korean sovereign wealth fund said the chosen bank will be appointed for a three-year term, with a possible two-year extension depending on its performance.

The winning bidder will be responsible for providing core custody services, including securities and fund settlement and tax services, fund accounting and administration, and alternative asset management services.

Korea Post has opened its sixth tender for the year, seeking an asset manager for a $157 million (200 billion won) domestic investment mandate for its insurance unit.

Structured as a blind fund with a ten-year investment period, the mandate will focus on joint investments with other institutional investors and funds. The blind fund will be established within six months of the manager selection, the government postal agency said in its request for proposal on April 27.

Applications are open until May 11 with due diligence and manager selection scheduled by the end of June. The winning bidder will be appointed for a five-year term. Korea Post, which has around $122 billion in assets, did not specify the criteria for applicants.

The Philippines’ Quezon City – the country’s most populous city with a population of over 2.9 million – will soon establish the Social Welfare Assistance Program (Swap), the city’s own version of the national government’s pension fund, announced its mayor Maria Josefina Belmonte.

An ordinance to set up the new fund has been signed, she said on May 2, but the implementation will be put on hold until after the local and general elections on May 9. The local government has enough funds to fully implement the programme, which will directly benefit senior citizens, single parents, and disabled persons among others, she said.

Cryptocurrency trading platform Amber Group is in discussions to raise fresh funding at a valuation of $10 billion, according to sources familiar with the matter.

The Singapore-based startup – backed by Singapore’s state investment firm Temasek Holdings and other investors including Sequoia China, Pantera Capital, and Tiger Global Management – has begun talks with prospective investors about the new round, which would mark a more than tripling of the startup’s previous $3 billion valuation, said the sources who requested anonymity.

The two insurers are working together to close protection gaps, particularly in long-term care, which has become critical because of rising costs and higher life expectancy among Singaporeans. Through the partnership, Care Secure, a CareShield Life supplement plan, is now available through Prudential’s network, in addition to Income’s own multi-channel distribution network.

Singapore-based early-stage Venture Capital fund, Accelerating Asia, has announced its latest round of investments, which include nine new companies joining Cohort 6 of the flagship programme and additional capital into four existing portfolio companies, the company’s website announced on May 5.

The new investments take Accelerating Asia’s portfolio to 52 startups, which have raised a total of over $42 million (S$58.4 billion). Cohort 6 startups have a market presence in more than 10 countries in Southeast Asia, South Asia, North America, and Europe and cover eight verticals including proptech, marketplace, fintech, logistics, services, eCommerce, and healthtech.

The eight pension and annuity funds overseen by the Bureau of Labor Funds (BLF) suffered investment losses of NT$62.09 billion ($2.1 billion), or a negative return rate of 1.14%, in the first quarter ended March 31, according to a company statement on May 3.

This is BLF’s first quarterly loss in two years due mainly to global equity market volatility amidst the Covid-19 outbreak, geopolitical instability, and soaring inflation. Although the returns in the first quarter were affected by the market, the monthly investment loss in March 2022 narrowed by NT$94.8 billion, said BLF

As of the end of March, the average return rate of BLF was 5.47% over the past 10 years and  6.42% over the past 5 years. The long-term investment performance is still stable, BLF said.

Sat May 14 , 2022
Welcome to this episode of The Friday 5 with Steve Greenfield, Founder and CEO of Automotive Ventures, an auto technology advisory firm that helps entrepreneurs raise money and maximize the value of their companies. My visits to dealerships continue. Last week I was in Dallas and Boston, and this week […] 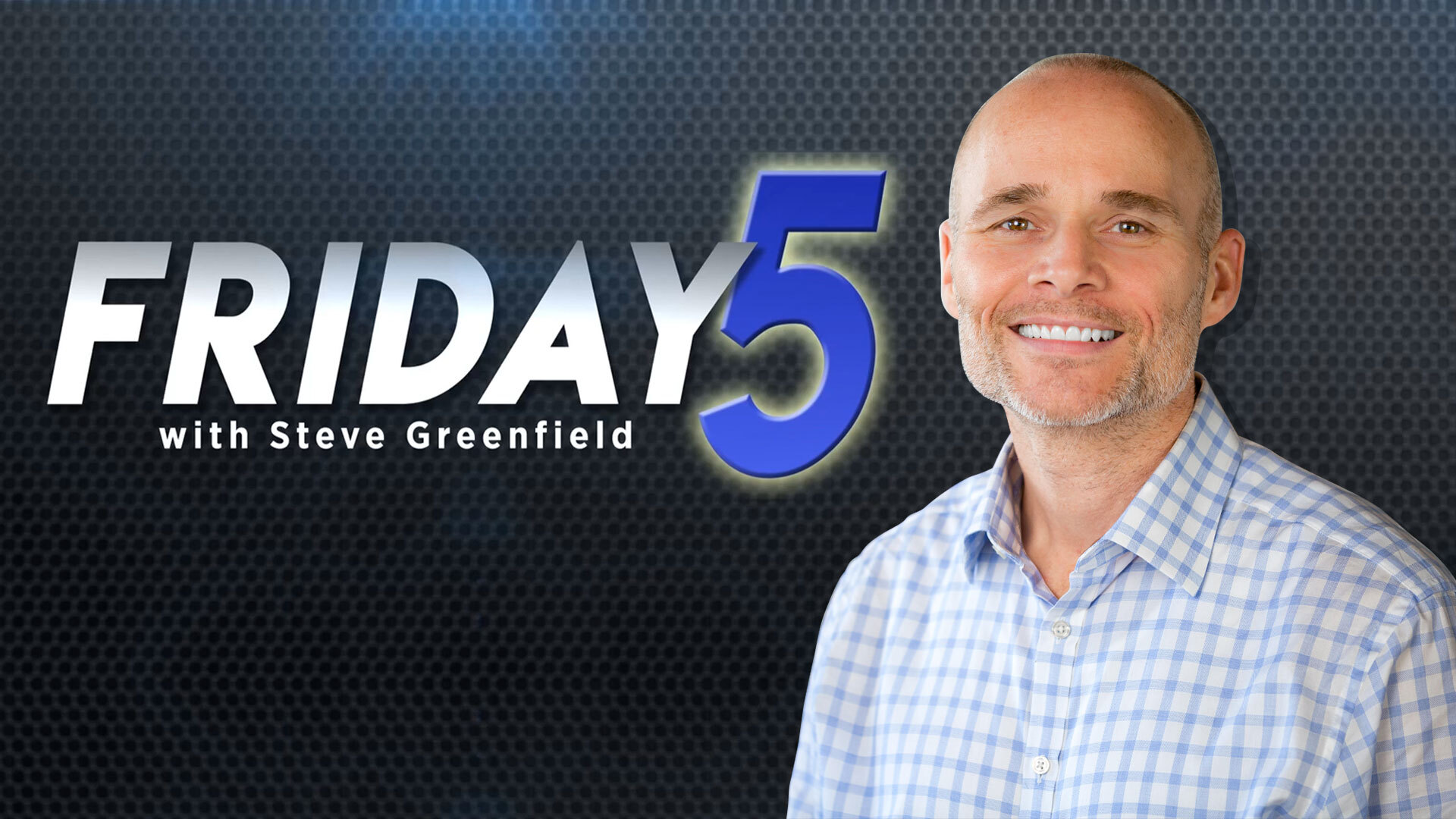