OVERLAND — Local general contractor Alberici Constructors Inc. expected to wait years to bid for the Mississippi River dam project in Winfield. But thanks to the $1 trillion federal infrastructure deal, the Army Corps of Engineers moved the upgrade of Lock and Dam 25 to 2022.

The project is a trickle of what local construction companies and regional planners hope will eventually amount to a flood of public works projects in the St. Louis region due to the infusion of federal money. Local construction companies say they’re anticipating more work — and more revenue — while regional leaders look to make a dent in their wish list of projects that have been underfunded and out of reach for years.

“What we’re about to see,” said Fred Biermann, Alberici’s vice president, “is 10 to 12 years worth of work that could be put in place over the next five to six years.”

President Joe Biden signed the Infrastructure and Investment and Jobs Act in November. It is a reauthorization of the federal transportation bill, action that happens every five to six years. But Biden’s deal adds more money to the bucket — $1.2 trillion compared to $305 billion last cycle — that will go to new and existing programs related, sometimes loosely, to infrastructure.

Roads and bridges will get the lion’s share. But airports, rail and transit also will get money, as will efforts to expand broadband internet and electric vehicles, among other initiatives.

The legislation is not sweeping or visionary, experts say — it is not another New Deal, the public works watershed that started in the 1930s. Nor is it like the 1956 Federal Highway Act that created the country’s modern-day interstate system.

Instead, it’s a maintenance fund that provides a jolt of cash to a grossly underfunded area. The American Society of Civil Engineers, which assesses U.S. infrastructure, estimated the gap between needs and spending at nearly $3 trillion.

Linda Samuels, an urban design professor at Washington University, said a colleague likened the deal to getting socks on Christmas.

“It’s a gift, it’s a contribution, but the reality is, like socks, you’re basically filling in gaps for a necessity,” Samuels said.

East-West Gateway Council of Governments, the region’s planning arm, said the deal is still a boon. The organization has requested cash for several projects, including trail improvements in Madison County, “traffic calming measures” on Goodfellow Boulevard in St. Louis, and new roads for a commercial development in St. Charles. It also plans to apply for help with the north-south expansion of MetroLink.

The federal government is still determining how to allocate all of the money, and it’s not clear when that will be determined. But some agencies already know how much they expect to get.

The Missouri Department of Transportation, for example, is set to receive $7.7 billion over the course of five years, about $2 billion more than it got last funding cycle.

MoDOT works with regional partners across the state to update its transportation priorities, called the State Transportation Improvement Program. The agency released a draft Wednesday for fiscal years 2023-2027 that includes new projects due to the increased federal and state funding, said spokesperson Linda Wilson Horn.

The civil construction company is currently rebuilding the Interstate 270 exchange in north St. Louis County. MoDOT recently awarded it the I-70 Cave Springs to Fairgrounds project. But, in prior years, it has had to expand into other sectors, like railroad and corporate work, “to keep the lights on,” said Thom Kuhn, president of Millstone Weber.

“It’s going to reinvigorate an industry that’s been in the doldrums for 15 years,” Kuhn said. “What’s not to like?”

But the firm, which reported $2.7 billion in revenue companywide last year, also anticipates growth in the green energy sector, an industry that Biden’s deal wants to allocate billions of dollars to across a variety of programs.

In previous years, Hesser said, Alberici’s energy work was primarily with coal-fired power plants. But recently it has done projects for a large electric vehicle manufacturer as well in hydropower.

“There’s a big push for clean energy and green energy,” Hesser said. “I think it’s a good match, not just for us, but for the country as well.

Editor’s note: MoDOT’s State Transportation Improvement Program includes additional projects due to the new federal funding. This story has been updated to reflect that.

Get the latest local business news delivered FREE to your inbox weekly.

Opinion: Emergencies Act inquiry must examine the fallout for banks and their trucker clients

Fri May 20 , 2022
Truck drivers and others protest COVID-19 pandemic restrictions in Ottawa on Feb. 12.Ted Shaffrey/The Associated Press Participants in the self-described “freedom convoy” protests risk becoming financial martyrs. That’s because the Trudeau government’s invocation of the Emergencies Act to end blockades created repercussions for financial institutions and their customers that are […] 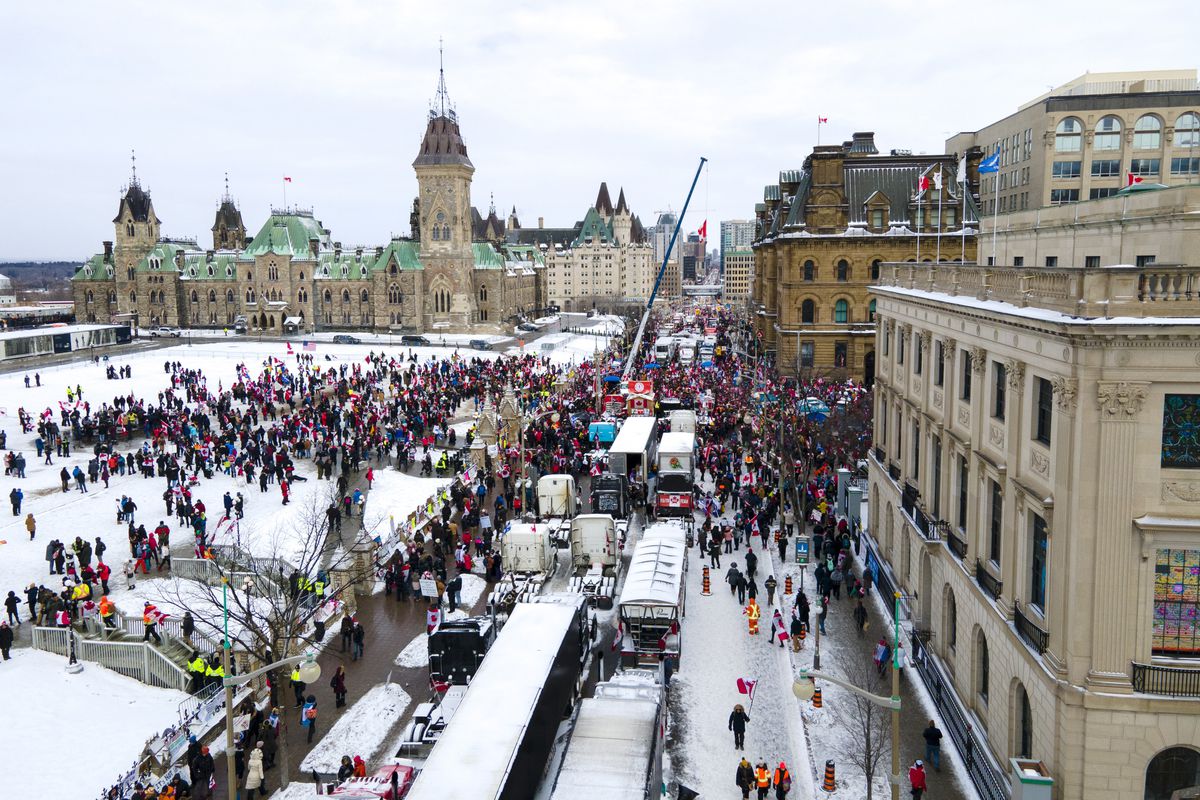