Industry experts presented snapshots of a wide range of individual markets at Thursday’s forecast conference of the Maine Real Estate & Development Association. Following are takeaways from some of the discussions.

Bangor spaces are filling up — but there’s still capacity

Tanya Emery, economic development director for the city of Bangor, said the real estate market in that area has shown strong signs of growth in the past year.

The office sector is rebounding, retailers and restaurants showed stability and demand for industrial space has been strong.

Of office space, half of the vacancy is tied up in one building, which University of Maine System offices formerly occupied. On the flip side, 396 Griffin St., which was nearly empty in early 2021, has nearly filled its 45,000 square feet of office space.

The Waterfront Concert venue had its lease extended through 2032, and in turn invested $7 million on upgrades.

On the retail and restaurant front, new restaurants include the vegan venue Little Gem and Smoke & Steel BBQ. New retailers include Bob’s Discount Furniture near the mall.

To address a “critical need” for housing, two significant properties opened: Newton Place, with 40 units of senior housing, and the Schoolhouse Apartments, with 66 units.

Industrial space is also in demand. The vacancy rate is 1%. “We are missing opportunities,” she said. “We simply do not have the space.”

To accommodate demand for industrial and flex space, the city has adjusted zoning to allow for some light manufacturing and warehouse space in shopping areas. The zoning change could open up possibilities for the Bangor Mall’s long-vacant Sears space, which is 92,000 square feet.

Overall, Emery observed, there is land available for industrial development as well as housing.

The southern Maine industrial market had very few COVID-related hiccups because many industrial businesses were deemed “essential” during the pandemic, said Justin Lamontagne, a designated broker with the Dunham Group.

Warehouse space continues to be tight as online buying has created a need for storage space for deliveries. Meanwhile, the cannabis industry continues to grab industrial space, and they are deep-pocketed customers.

The vacancy rate in the industrial sector is 1.69%, compared with a national average of 4% to 5% percent, noted Sam LeGeyt with the Dunham Group.

“There was dramatically escalating pricing in sales and leases,” Lamontagne said. “We are mired in a supply and demand imbalance. Landlords have all the leverage and can be selective.”

Lamontagne said he expects the vacancy rate to fall even further in 2022.

“The bull run will continue for the foreseeable future.”

For hotels, a rush of travelers could be outweighed by staffing shortages, COVID concerns

The outlook for hotel real estate in Maine looks strong for 2022, according to Sean Riley, president and CEO of Maine Course Hospitality Group.

Occupancy rates and the average daily rate charged by hotels are both expected to exceed pre-pandemic numbers.

Occupancy rates in 2021 had already outpaced those of 2019, before the pandemic, when they averaged 60.6%, Riley said, citing data from Smith Travel Research.

“The rollercoaster ride we’ve been on the last couple years has really been tough,” said Riley, citing data from Smith and from Lodging Econometrics.

While the forecast is mostly good news, there are some caveats.

Labor shortages may play havoc on hotels, which could then have trouble meeting demand.

“A hotel might have to cut off occupancy at 50% because of the lack of housekeepers,” Riley said.

Another concern is the increase in competition. Last year, hotel openings were expected to create 218 new guest rooms. In fact, the number was 325 new rooms.

Hotels have seen fewer business travelers, meaning they rely more on leisure travelers, who tend to buy at the last minute and look for bargain rates.

Finally, of course, COVID will continue to affect the travel in 2022, Riley noted.

Outside of Portland, in central and midcoast Maine, multifamily dwellings also saw strength among buyers, which pushed prices higher in the past year.

Waterville and Lewiston-Auburn also are benefitting from that trend, he said.

David Holman, a Realtor with RE/MAX Riverside, said the midcoast towns of Bath, Brunswick and Topsham are seeing growth due to their manageable commuting distance to Portland. Multifamily dwelling also saw a surge in these markets, according to Holman.

“We saw one or two decades of growth in one year,” Holman said of the multifamily market.

Rents have surged in the midcoast, as well. A one-bedroom apartment in Brunswick that fetched $838 per month in 2018 now goes for about $1,348 a month.

“I don’t think this rate of growth is good or sustainable,” Holman said.

Brunswick has benefitted from growth at Brunswick Landing, with more businesses opening there. Holman said job growth in Brunswick was five times that of Maine’s overall job growth.

Going forward, he expects the multifamily market “will cool down from red hot to very warm” amid interest rate increase and recession fears after the midterm elections.

‘Solid 2022’ lies ahead for retail real estate in southern Maine

New restaurants snapping up vacant spaces in Portland, along with commercial development in Westbrook’s Rock Row and Scarborough’s “mini-Rock Row” on Route 1, all point to a positive outlook for the southern Maine retail market.

That was the readout from Peter Harrington of Malone Commercial Brokers in his analysis. Going from 2021 to 2022, the sector is “on very solid footing,” he said.

“I’m not saying, ‘We’re crushing it,’” he added, “but we’re certainly holding our own.” And that solid footing has been more solid than expected during the pandemic.

As for the Maine Mall, Harrington said the current vacancy rate is 8% as the facility looks to diversify to residential, hotel, entertainment and so-called experiential uses.

While it may take a while to find a buyer, Harrington said he wouldn’t be surprised if a big retailer like Costco takes it in the next couple of years. “Will it sit there forever? I don’t think so.”

On the whole this year, “the future for greater Portland and the southern Maine retail market is bright,” Harrington said. Maine’s pluses and attraction as a place to live and visit outweigh challenges such as online shopping, inflation and a lack of labor, he said.

A lesson in adaptation for the southern Maine office sector

“The office market and office occupiers are learning to adapt” to the pandemic, said Nate Stevens, a partner and broker with the Boulos Co.

“It’s a tenant’s market. The pandemic put the tenant back in the driver’s seat,” Stevens said. “Options are now there for tenants. There are choices for tenants.”

Portland is actually performing strongly compared with other locales. A recent Boulos survey found that 49% of respondents were fully back in the office in Portland, compared with national rates in the 30% range, Stevens said.

One factor dampening the office market is the amount of sublease space available, with 335,800 square feet of it now on the market.

Overall, the downtown Portland market will continue to improve, but suburban vacancy rates will increase, especially around the Maine Mall area, Stevens said.

Sat Jan 22 , 2022
U.S. distributors recorded a record year in 2021 for revenues while protecting margins — in spite of continued pandemic and supply chain pressures in the back half of 2021. And the outlook for 2022 is positive as economic and market indicators point to “new-normal” disruptors stabilizing. Those are a few […] 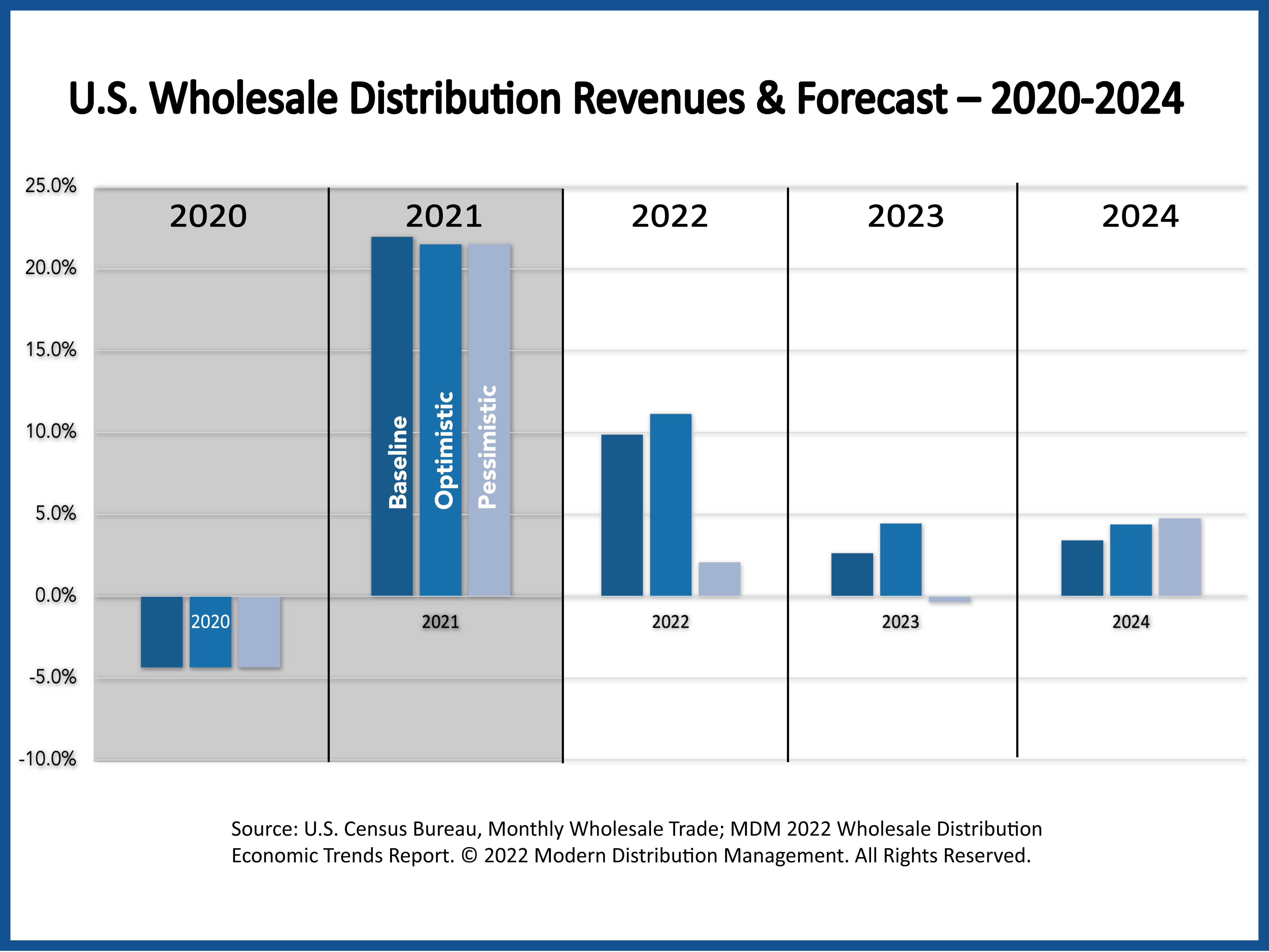