Main Street and Wall Street are often at a distance when it comes to the state of the economy. The likelihood of a recession hitting in 2022 is the latest example. Both camps are bearish, but small business owners are leading the way in negative sentiment — by a notable margin.

Wall Street has been consumed with the Federal Reserve’s efforts to combat the inflation it pegged wrong for too long, and the risk that interest rate hikes will lead to a recession. A survey earlier this week from CNBC found that more than half of economists and investment professionals expect the Fed to fail in its mission to engineer a “soft landing” for the economy. The stock market breathed a sigh of relief on Wednesday, with stocks surging after Fed chair Jerome Powell said that a more aggressive rate hike of 75 basis points is not being considered, and that the central bank remains convinced it can bring inflation down without crashing the economy.

The market was giving back those brief gains on Thursday, and on Main Street, the central bank messaging was never likely to cause any short-term relief. Eight in ten small business owners expect a recession to occur this year, according to the latest CNBC|SurveyMonkey Small Business Survey for Q2 2022. Inflation remains the top concern for small business owners polled by CNBC and their business outlook is negative. The survey finds few small business owners seeing any bright spots in the current economy: just 6% rate the current state as excellent and 18% as good, while 31% rate it as fair and 44% rate it as poor.

While the survey’s small business confidence index ticked up for the first time in the Biden administration due to responses on core index questions related to immigration policy and a 3 percentage point increase (to 36%) among small business owners who described their current business conditions as good, it remains near its all-time lows and well below its pre-pandemic baseline.

“There just isn’t a lot of optimism on Main Street these days,” said Laura Wronski, senior manager of research science at Momentive, which conducts the survey for CNBC.

Small business survey results can be influenced by politics, with the community skewing conservative, but economic worries are high among all small business owners. Those who identify as Republicans or lean to the GOP are leading the bearish outlook, with 91% expecting a recession, but among those who are Democrats or lean to the Democratic party, it is still 66% that expect a recession this year.

The survey was conducted by Momentive between April 18-25 among a national sample of 2,027 self-identified small business owners.

In a parallel survey of the general public conducted for CNBC, a nearly-identical 77% expect a recession to occur this year, again with Republicans more apt than Democrats to forecast economic trouble (87% vs. 71%).

Thirty-eight percent of small business owners say inflation is their biggest concern, twice as many as the second place “supply chain disruptions” (19%) and well above Covid-19 (13%) and labor shortages (13%).

A majority of small business owners (75%) surveyed say they’re currently experiencing a rise in the cost of their supplies. But as much as they need to offset those rising costs by raising prices, the CNBC survey finds more are hesitant to pass on price hikes to consumers who are already hard-hit by inflation.

While this finding contrasts with other recent small business surveys showing that price increases are still a requirement for the majority of small businesses given the input cost inflation, the CNBC data matches a bleaker business outlook found in other recent Main Street data.

The National Federal of Independent Business monthly surveying shows the outlook for business conditions at the lowest level in its history, and that bearish view has increased sharply. The percentage of small business owners who expect conditions to be worse in the next six months hit a net negative 49% in March, the most recent month for which data is available, increasing from a net negative of 35% in the previous month. In August, that reading was at a net negative 28%.

“The inflation pressures have continued, and now seem more built-in and foundational,” said Holly Wade, director of the NFIB Research Center. “It really is a concern about the ability to operate a business going forward, and it is incredibly stressful to find ways to balance absorbing the price increases from inputs and the level to which those price increases are passed along. … Something has to break and it will likely be a recession,” she said.

“They can only do so much,” said Eric Groves, co-founder and CEO at online small business platform Alignable. “They are already inhibited from getting all the inventory they want, and the only way they get out of this is to bring customers back and drive more revenue, and they are struggling to figure it out.”

His firm’s research on small business anticipation of sales back to pre-pandemic levels continues to shift out in time. Since the end of 2021, every month of its data has shown a shift in outlook in when Main Street expects to be back to full recovery. At the beginning of this year, the expectation was Q1 of 2023, now it is Q4 2023.

“The customers are not coming back as fast as they thought and inflation is squeezing margins. And with all of that going on, it is not surprising that the sentiment is that a recession is coming,” Groves said. “The ability to shift pricing to customers is not as strong as it is for a big box business.”

The challenge for many on Main Street has been the ability to access inventory they need to sell at a competitive rate, which remains much lower than for a big retailer. “They are not getting their fair share of the widget,” he said.

The percentage of small businesses indicating they are back to at least 90% of pre-pandemic revenue, which had been a sign of health, is dropping again, according to Alignable, from 40% to 27% in its most recent data, as they attempt to compete against much better economics of scale.

Even the best market pundits have a weak track record at calling a recession, at least the exact timing, and there is no reason to expect that small business owners are any better at pinpointing this economic turning point. But such a negative view on the economy coming from a large component of it is significant.

This hasn’t shown up in the Q1 business investment figures, which were solid, but a recent slowing in core durable goods shipments in the past two months suggests a slowing in the pace of business investment in Q2, according to Kathy Bostjancic, chief U.S. economist at Oxford Economics. “However, it is too early to say we are seeing a turning point and long lasting slowing in capex,” she said.

Consumer sentiment is down sharply, according to the University of Michigan, but consumers continue to spend at a healthy clip and the Conference Board sentiment measure is higher, reflecting its consumer survey focus on the labor market, which remains hot.

Right now, with inventory levels so low, in large part due to the supply chain disruptions, companies need to continue to invest to rebuild inventory levels, as well as invest in technology for productivity gains, especially with the cost of labor so high. Business owners may be hiring less and doing more work themselves, but to recruit and retain any staff right now is likely critical to increasing sales as well.

These requirements in the supply chain and labor market are adding to the stress level on Main Street, and ultimately, “it can exert a real economic impact,” Bostjancic said. “Business owners’ confidence levels can directly impact their investment decisions and hiring as well.”

“They are not seeing how the current environment is sustainable,” Wade said. “Consumer spending is strong and GDP is strong, but the stress they are feeling in trying to absorb these costs and fill positions and continue to increase compensation for retention and recruitment is all incredibly stressful,” she said.

Robert Fry, an economist who is among the respondents to CNBC’s Fed Survey, remains of the view that a recession does not hit until late 2023, and he cited the words of Rudi Dornbusch, a famous MIT economics professor who taught central bankers: “A crisis takes a much longer time coming than you think, and then happens much faster than you thought.”

He views the current environment as still more rooted in negative sentiment than actual negative data. “Three variables drive sentiment. The unemployment rate, the stock market, and the price of gasoline. And it’s not a weighted average. People just grab one at a time, and right now it’s gasoline prices.”

“Ultimately, I think small businesses will be right, they’re just early,” Fry said. “They don’t appreciate the lags of monetary policy. … people cry wolf for a long time, but the wolf eventually comes.”

Groves said how small business owners define recession may be less academic and more a reflection of just how tough their current operating conditions are, and what it will take to recover to pre-pandemic levels, and their ability to sustain the business through the next few years.

Inflation putting pressure on margins, pushing back revenue goals and shifting out the timeline to full recovery, puts everything at risk for small business owners. “It’s going to be more of a slog,” Groves said, and to a business owner, that may feel like recession, regardless of the formal economic research. “I don’t know what going into recession means versus the operating margins of my business being challenged, and how much I have to spend on things. … and I have an econ degree,” he said. “You put your head down and do whatever you need to do to survive, and you do more with less, and you see them working more hours. Owners have to figure out a way through it.”

Sun May 8 , 2022
Whether you’re PCSing across the country or just down the road, you still need to find a place to live. But base housing is often not the right fit or even readily available, and finding a home off base can be really expensive, especially in a tight housing market. Military […] 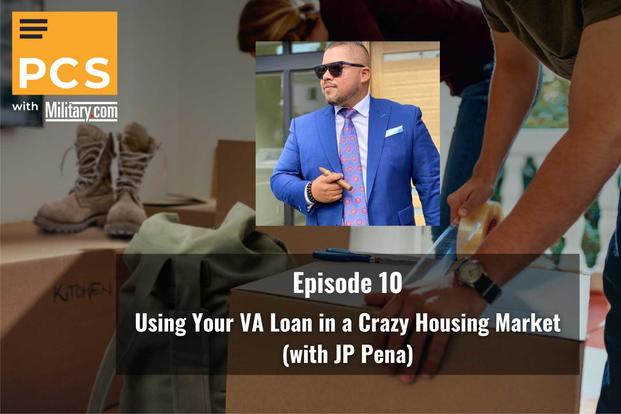