David Solomon, chairman and chief executive of Goldman Sachs, said the bank was making very good progress on its strategic plan set in 2020.

Solomon was interviewed by Alison Nathan, senior strategist within global macro research at the bank, for the Exchanges at Goldman Sachs podcast. He became chief executive in October 2018 and chairman in January 2019 with most of his tenure so far dominated by the Covid-19 pandemic.

He said: “The pandemic has created an economic structure that really benefited our clients and our business. The combination of the macro environment and this level of client activity has really led to an extraordinary year.”

For 2021 Goldman Sachs reported record net revenues of $59.3bn, record net earnings of $21.6bn and record diluted earnings per share, each significantly surpassing the previous record. In addition, the return on equity of 23% was the highest since 2007.

At the start of 2020 the bank laid out a series of strategic objectives on its Investor Day which Solomon described as a very simple plan to strengthen and invest in the core businesses, to invest in and build key growth platforms and to run the firm more efficiently.

Solomon said: “In doing so we thought that we could significantly increase returns and grow the platform in a meaningful way.”

The management team set up about 35 key performance indicators to track progress of goals including the development of a transaction banking platform, which has been launched in the last two years for corporate clients; growth of asset management – particularly the alternatives business; growth of wealth management and the digital consumer bank.

“We are tracking ahead on nearly all of those KPIs,” said Solomon. “So we feel like we’ve made very good progress.”

Solomon said his biggest macroeconomic concern is inflation, which is real and in the economy.

“The average tenure of a public company CEO is four and a half years, so if you have inflation for a couple of years it sure doesn’t feel transitory,” he added. “It is dominating everything you’re doing in your business and it is going to have an impact on growth.”

He believes that the pandemic is very quickly becoming endemic in society as vaccines are really effective and other treatments are being developed. 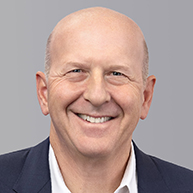 “I do think the focus is going to pivot and shift because of the monetary and fiscal policy actions that have come out of the pandemic,” he added. “We have set the table for a different environment than the one we have operated in for quite some time as the Federal Reserve raises rates.”

Solomon said there are a handful of topics that CEOs want to talk about in every meeting which include the journey out of the pandemic, the return to the office and employee retention, China, inflation and economic growth.

“Interestingly, they are also very interested in technology, crypto, and new innovations,” he added. “Those are all big picture topics.”

Companies are trying to position themselves as competitively as possible in the macroeconomic landscape, which is one reason for the acceleration of mergers and acquisitions, said Solomon. Global M&A reached a record $5.8 trillion in 2021, up 64% from a year earlier, according to data provider Refinitiv.

“The big thing that boards are thinking about is whether they can get a deal done,” added Solomon. “The regulatory environment is a lot more difficult for large transformative deals.” 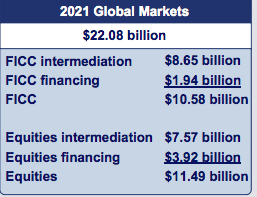 Goldman Sachs announced its own acquisitions last year – the €1.6bn purchase of NN Investment Partners, and the $2,24bn deal for GreenSky, the largest fintech platform for home improvement consumer loan originations. The bank is in the early stage of integration as neither deal has closed. Solomon expects GreenSky to close shortly and NN IP around the end of the first quarter.

“We feel very good about both these acquisitions,” he added. “We’re very excited about GreenSky as we looked at the merchant network they built over 15 years and thought it was very important for our digital consumer bank.”

He continued that it would take Goldman Sachs between seven and 10 years to build a comparable merchant network.