The 59-year-old mogul’s net worth reached $88.5 billion on Monday, according to the Bloomberg Billionaires Index, eclipsing fellow countryman Mukesh Ambani’s $87.9 billion. With an almost $12 billion jump in his personal fortune, Adani is the world’s biggest wealth-gainer this year.

“The Adani Group has spotted and entered all the happening sectors at the right time, which has appealed to a select band of foreign portfolio investors,” said Deepak Jasani, head of retail research at Mumbai-based brokerage HDFC Securities Ltd. “The sectors are capital-intensive and the company has faced little difficulty in raising funds to expand.”

Some of Adani Group’s listed stocks have soared more than 600% in the past two years on bets his push into green energy and infrastructure will pay off as Modi looks to revive the $2.9 trillion economy and meet the India’s carbon net-zero target by 2070. MSCI Inc.’s decision to include more Adani companies in its Indian benchmark index has also meant any fund tracking the gauge will have to buy the shares. 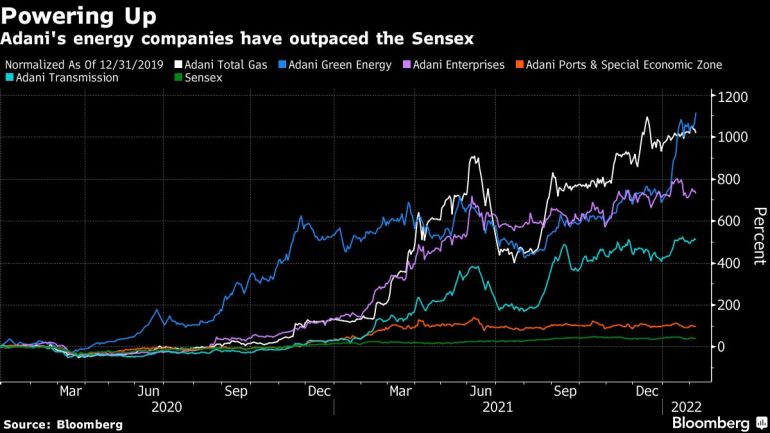 While 2020 was Ambani’s year — his oil-to-petrochemicals conglomerate Reliance Industries Ltd. created billions of dollars in wealth through a technology pivot that brought in Facebook and Google Inc. as investors — the pendulum has since swung toward Adani.

Both Indian billionaires — who have built their empires on fossil fuels or coal — are now pushing ahead with green energy projects. Ambani has committed $10 billion over the next three years as part of a larger $76 billion spend plan in renewables. Adani has pledged to invest a total of $70 billion by 2030 to help his group become the world’s largest renewable-energy producer.

Firms including Total SE and Warburg Pincus LLC have invested in Adani’s companies in 2021. The French oil giant agreed in January 2021 to buy 20% of Adani Green Energy Ltd. and a 50% stake in the Indian partner’s portfolio of operating solar assets, though at a steep discount. The deal value was just $2.5 billion, compared with Adani Green’s market capitalization of $20 billion at the time.

In March of 2021, Warburg said it would invest $110 million in exchange for about half-a-percent of Adani Ports and Special Economic Zone Ltd.

As part of his green push, Adani has unveiled plans to boost his renewable-energy capacity almost eightfold by 2025. In May, Adani Green agreed to buy SoftBank Group Corp.’s local renewable-power business in a deal that gave SB Energy India an enterprise value of $3.5 billion.

Shares of Adani Green and Adani Total Gas Ltd., a Mumbai-listed joint venture with the French firm, have rallied more than 1,000% since the beginning of 2020. Flagship Adani Enterprises Ltd. has advanced more than 730%, Adani Transmission Ltd. more than 500% and Adani Ports 95% over this period. The benchmark S&P BSE Sensex Index has gained 40% by comparison.

Scant analyst coverage hasn’t deterred MSCI from adding some of the Adani stocks to its India gauge. Three of the tycoon’s listed companies were included in May, taking the group’s total footprint to five. The addition has led to a more mandated buying by investors who track the gauge, HDFC’s Jasani said.

A college dropout, Adani first tried his luck in Mumbai’s diamond industry in the early 1980s before returning to his home state of Gujarat to help run his brother’s plastics business. In 1988, he set up Adani Enterprises.

The businessman is a survivor of crises. More than two decades ago, he was kidnapped and held for ransom. In 2008, he was among the hostages at Mumbai’s Taj Mahal Palace hotel during the terror attacks that killed at least 166 people.

Adani’s sustainability claims and green ambitions are criticized by climate campaigners who point to the group’s Carmichael coal mining project in Australia, which will expand supplies of the highly-polluting fossil fuel. The Adani Group opted to use its own money after having trouble in securing external funding and said in December that it was ready to begin the first coal exports from the Australian mine.

The billionaire has also come under attack from Modi’s political opponents for his proximity to the powerful leader, with some even calling it cronyism. Adani has dismissed such criticism as baseless, and thrived with his successful strategy of dovetailing his investments with Modi’s priorities.

Some of the big Adani Group businesses such as ports are “almost monopolies,” said Sanjiv Bhasin, director at local brokerage IIFL Securities Ltd. With many Adani companies being closely linked to India’s industrialization and infrastructure push, they are “in a sweet spot and they have capitalized on it,” Bhasin said.

Wed Feb 9 , 2022
Ghosting isn’t just a disappearing act reserved for the odd Tinder match or the bloodthirsty apparitions who chase Pac-Man through his endless labyrinthian metaphor for American consumerism. Ghosting—the act of severing all ties and communication with someone suddenly and without warning—happens between job candidates and companies, and perhaps more often […]