Equiteq, a global investment bank focusing on the knowledge economy, has promoted 11 team members within its US and European teams. The firm promoted seven people within its M&A team in New York, as well as four in its London headquarters.

“I am very pleased to announce these promotions among our North American and European teams. We are in the business of providing exceptional insights and advice to clients, and these individuals have all demonstrated excellence in our core values of curiosity, innovation and collaboration,” said David Jorgensen, CEO of Equiteq. “We look forward to continuing to reach new heights with these individuals and the rest of our global team.”

The seven promotions in Equiteq’s New York City mergers and acquisitions team are:

Alex Floess (director) has over a decade of experience in financial services, with expertise in M&A, capital structure, capital markets, corporate finance advisory, and buy-side investing. Prior to joining Equiteq last year, he spent four years in the industrials investment banking team at Mizuho, where he was a VP.

Floess was also previously an associate in the corporate debt origination and acquisition finance practice of BNP Paribas and an a high yield credit analyst at Prudential Financial. He holds a bachelor’s degree in applied economics and management from Cornell University and is a CFA. 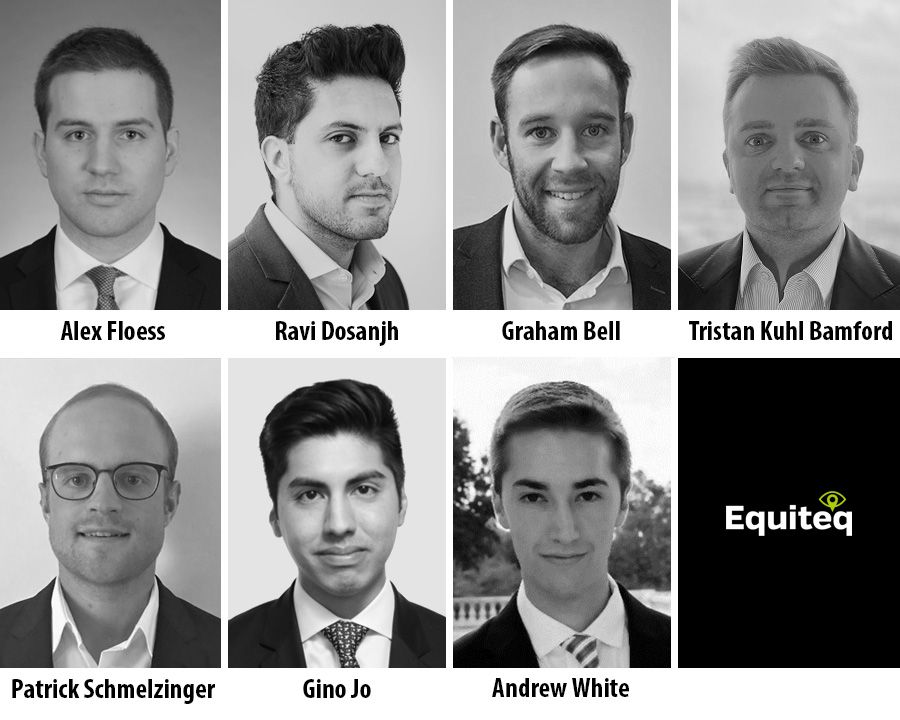 Ravi Dosanjh (VP) focuses on M&A engagements in the management consulting and IT space. He joined Equiteq in 2015 as an intern and became an associate in 2019. Before joining Equiteq he was a business and strategy analyst at Decipher Media Consultancy.

Dosanjh has a bachelor’s degree in geography from the University of Cambridge and is a CFA.

Graham Bell (VP) delivers transaction support and strategic advisory to clients throughout the sale process. He joined Equiteq’s London office as an associate in 2019 and relocated to New York last year. He previously spent over four years at KPMG UK, where he was an associate in the M&A practice.

Bell holds a bachelor’s degree in law from The University of Dundee.

Tristan Kuhl Bamford (VP) has a decade of experience in finance, entrepreneurship, and market intelligence. He joined Equiteq in 2020 as a senior associate, having previously co-founded and run a robotics startup focusing on the energy industry.

Before that, he was a corporate development associate at Quantum Leap Technologies, a Scotland-based provider of battery, motor, and pump technology to the energy industry. He started his career at Aberdeen Standard Investments, where he spent more than three years and was latterly a product opportunities analyst.

Patrick Schmelzinger (associate) joined Equiteq in 2020 as an analyst, having previously completed internships at Cohen & Company and NAV Valuation & Advisory. He holds a bachelor’s degree in finance, economics, and business administration from Elmira College.

Gino Jo (associate) joined Equiteq last year after spending three years as an analyst at Deutsche Bank. He previously completed internships at Barclays and JP Morgan. He has bachelor’s degrees in finance and economics from the University of South Florida.

Andrew White (associate) joined Equiteq as an analyst last year after spending three years at Mizuho, where he was latterly an associate in the industrials investment banking team. He previously completed internships at Kingsun Investment and Frontier Community Bank. He has a bachelor’s degrees in finance and management as well as Chinese language and literature from the University of Virginia.

With offices in Europe, the United States, Asia, and Australia, Equiteq is one of the world’s larger M&A consultancies specializing in the professional services industry.

The firm recently advised on the sale of Enowa, a Philadelphia-based SAP consultancy, to Reply.

Thu Jan 27 , 2022
CHICAGO–(BUSINESS WIRE)–Adtalem Global Education (NYSE: ATGE), a leading provider of professional talent to the healthcare industry, announced today it has entered into a definitive agreement to sell its Financial Services segment, which includes ACAMS (Association of Certified Anti-Money Laundering Specialists), Becker Professional Education and OnCourse Learning, to a consortium of […]